4-2021 Ramanujan Prizes in mathematics, from India and more

Srinivasa Ramanujan, the legendary Indian mathematician, has inspired many mathematicians in India and worldwide. It is no surprise that his name is associated with some major prizes and awards in mathematics.

According to
http://www.actforlibraries.org/overview-of-the-ramanujan-prize/,
there are at least two major prizes awarded in mathematics, from India. These are awarded by SASTRA University and ICTP (along with the Gov. of India and IMU).

In addition to the above, Infosys Science Foundation awards prizes in six categories of science, including mathematics :
https://www.infosys-science-foundation.com/prize/index.asp

There are many more awards and prizes for mathematics worldwide
https://en.wikipedia.org/wiki/List_of_mathematics_awards 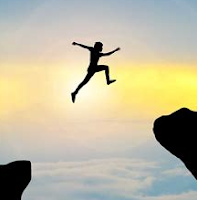 Sometimes, it is wiser not to look before you leap. Here is the personal experience I had 41 years ago !

That is why they say "fortune favours the bold".
Posted by dr.partha at 12:36 No comments:

2-2021 This may happen to you, if you are a mathematician taking a flight !

Why should mathematicians avoid flying ? 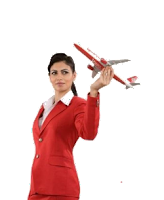 1-2021 The mathematician who was a tramp

Paul Erdos PGOM, LD, AD,LD, CD Paul Erdos was a brilliant hungarian mathematician. He was known both for his social practice of mathematics (he engaged more than 500 collaborators) and for his eccentric lifestyle. He did not have a roof of his own, and spent his life as a nomadic tramp.
Possessions meant little to Erdős; most of his belongings would fit in a small suitcase, as dictated by his itinerant lifestyle. Awards and other earnings were generally donated to people in need and various worthy causes. He spent most of his life traveling between scientific conferences, universities and the homes of colleagues all over the world. He earned enough in stipends from universities as a guest lecturer, and from various mathematical awards, to fund his travels and basic needs; money left over he used to fund cash prizes for mathematicians.
He would typically show up at a colleague's doorstep and announce "my brain is open", staying long enough to collaborate on a few papers before moving on a few days later. In many cases, he would ask the current collaborator about whom to visit next.
Who is a PGOM LD AD LD CD ? See this video for the answer.
This, and many more similar stuff is available here. Take a look.
Who says, mathematicians have no sense of humour ?
***

Norbert Wiener was in fact a very absent minded genius.

The following story is told about him: When they moved from Cambridge to Newton, his wife, knowing that he would be absolutely useless on the move, packed him off to MIT while she directed the move. Since she was certain that he would forget that they had moved and where they had moved to, she wrote down the new address on a piece of paper, and gave it to him.

Naturally, in the course of the day, an insight occurred to him. He reached in his pocket, found a piece of paper on which he furiously scribbled some notes, thought it over, decided there was a fallacy in his idea, and threw the piece of paper away.

At the end of the day he went home (to the old address in Cambridge, of course). When he got there he realized that they had moved, that he had no idea where they had moved to, and that the piece of paper with the address was long gone.

Fortunately inspiration struck. There was a young girl on the street and he conceived the idea of asking her where he had moved to, saying, "Excuse me, perhaps you know me. I'm Norbert Wiener and we've just moved. Would you know where we've moved to?" To which the young girl replied, "Yes daddy, mommy thought you would forget."

According to one of his biographers, Norbert Weiner spent 30 years “wandering the halls of MIT, like a duck”, one of its most well-regarded and renowned professors of mathematics, especially known for his absent-mindedness:

“His office was a few doors down the hall from mine. He often visited my office to talk to me. When my office was moved after a few years, he came in to introduce himself. He didn’t realize I was the same person he had frequently visited; I was in a new office so he thought I was someone else.”— Phyllis L. Block

“He went to a conference and parked his car in the big lot. When the conference was over, he went to the lot but forgot where he parked his car. He even forgot what his car looked like. So he waited until all the other cars were driven away, then took the car that was left.” — Howard Eves

“When we met, was I walking to the faculty club or away from it? I’m wondering, because in the latter case I’ve already had my lunch”

Weiner or Einstein ? Who is better ? You be the judge.

And now, some good ones about Einstein:

When Einstein met Chaplin in 1931, Einstein said, “What I admire most about your art is its universality. You do not say a word, and yet the world understands you."

“It's true.” replied Chaplin, "But your fame is even greater. The world admires you, even though they don't understand a word of what you say ."

That's what geniuses are made of.

Here is another good one about Albert Einstein : He was once found sitting outside his office, because when returning to his own office he saw a “GONE TO LUNCH. BE BACK IN 10 MINUTES” sign.

Supposedly, he was found sitting outside, waiting for himself to come back.
Posted by dr.partha at 11:39 No comments:

Can you believe it ? This is a story about the most incredibly brilliant mind of our times. 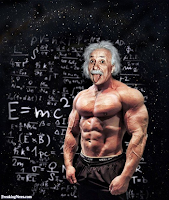 Einstein nodded appreciatively. The conductor continued down the aisle punching tickets. As he was ready to move to the next car, he turned around and saw the great physicist down on his hands and knees looking under his seat for his ticket.

The conductor rushed back and said, "Dr. Einstein, Dr. Einstein, don't worry, I know who you are. No problem. You don't need a ticket. I'm sure you bought one."

Einstein looked at him and said, "Young man, I too, know who I am. What I don't know is where I'm going."

As a teacher, I often ask questions in the class, basically to nudge and provoke my students to think. Sometime these questions have a misleading hint, just to confuse the student and lead him/her to the right concept. My favourite one is in my class on "number theory" when I wave my palm with all fingers open, and ask the question "show me the number five". The students invariably fall for the visual cue (my open palm) and fumble around, till I emphasise that a number is only an abstraction and cannot be used/shown all alone. I feel that such (misleading) prompting questions can often be useful in the classroom. But, this should be done in moderation and very carefully.

What does this community think about my approach ? Send me a mail.

This book drew my attention because of its deceptively worded title. I spent some time on it, trying to figure out what the author was trying to communicate. 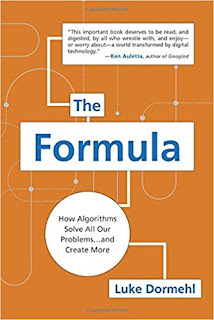 The author, Luke Dormehl is a journalist and technology writer. With a background in documentary film, he has contributed to Fast Company, Wired, Politico, The Sunday Times, and other publications.

The author must be appreciated for his honesty in admitting what this book is NOT about. It is certainly not a book on "How algorithms solve all our problems....." Neither is it a book on mathematics, logic or philosophy. There is not a single formula except for its mention in the title of the book. The author has gathered an impressive list of references and avoided mention of any reference to any author or article related to algorithms. The book is just a clumsy collection of rhetorical generalisations drowned in journalistic verbosity. This is proof that literate eloquence does not always lead to intelligent discourse.

Of course, the book did not answer any of the questions prompted in the title.

I am not disappointed.

Some time ago, I published this short article on randomness. I thought I was the only one who had such silly doubts on uch a well-known mathematical concept. And, now, I discover the profoundness of my question. I found this interesting article, on stackexchange. Thanks to the guys who posted the article and the responses. I love the opportunity to learn.
Posted by dr.partha at 08:16 No comments:

dr.partha
Secunderabad, TS, India
I have one more blog too -- "Take my word for it" located at https://drpartha.org.in/wp/# This is a self-hosted Wordpress blog.